Can private equity avoid the reckoning in public markets?

Will the decade-long party continue for private equity in 2022 and beyond?

“When the music stops, in terms of liquidity, things will be complicated. But as long as the music is playing, you’ve got to get up and dance.” – this oft-cited quote1 of former Citigroup chief executive Chuck Prince in July 2007 aptly sums up the boom-and-bust investment cycles witnessed in global financial markets, both public and private, in recent decades.

As we enter the second half of 2022, the question arises as to whether private equity (PE) can avoid this boom-and-bust pattern. The unprecedented levels of liquidity provisioned by major central banks in the wake of the 2008-09 Global Financial Crisis (GFC) – via zero-bound or negative interest rates, and quantitative easing – are now increasingly becoming a thing of the past, as policymakers seek to avert a stagflationary scenario.

And this ongoing interest rate hike cycle and quantitative tightening worldwide, led by the U.S. Federal Reserve, has already ravaged public markets this year, with both equities and bonds suffering big and rapid declines.

From private equity’s standpoint, the mood remains rather sanguine – at least as of now – with valuations yet to crater. The exuberance reflects the asset class’ stellar performance over the past decade, as highlighted by Bain’s 2022 Global Private Equity Report2. 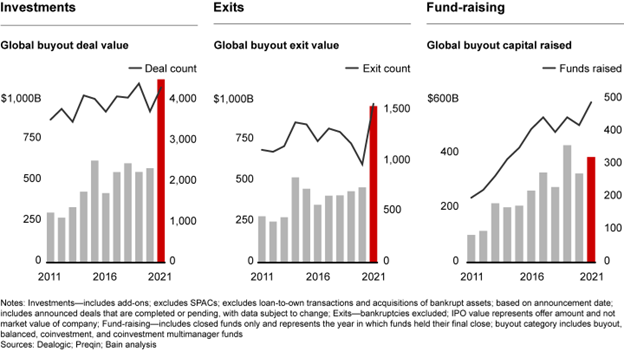 Can PE avoid the reckoning in public markets then? Would it manage to remain insulated from big losses in public markets, even as tightening financial conditions and increased borrowing costs adversely impact debt refinancing for leveraged buyouts? Will general partners (GPs) be able to exit holdings as smoothly as earlier, with IPO markets increasingly coming under pressure?

Some of the deals struck in recent years by PE funds, at rather exorbitant valuations, might come back to hunt them. Average buyout multiples jumped 9% last year, to 12.3x in North America, and marginally declined, to 11.9x, in Europe, a Bain study reveals. 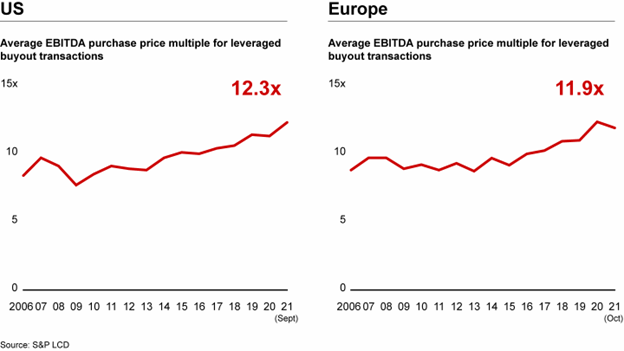 Even in 2022, deal valuations were pretty high. The first quarter saw a median buyout being priced3 at 14.6 times EV/EBITDA – the ratio of enterprise value to earnings before interest, taxes, depreciation and amortization – as compared to 11.9 times in 2018, PitchBook data shows. In contrast, the S&P 500’s valuation multiple has plummeted to 12.8 during the same period.

The proponents of private equity have long cited illiquidity as one of the great strengths and unique value proposition of the asset class, arguing that the absence of “mark-to-market” accounting allows financial sponsors and portfolio companies to think and act over the long term. However, the flip side is that it also can harbor complacency, with the lack of frequent asset valuations cloaking key business metrics such as operating efficiency and revenue gains.

It’s worth bearing in mind here that revaluations of PE holdings have historically lagged behind public markets by around two to three quarters. Add to that the inevitable correlation between economic cycles and fundraising, and it’s not tough to figure out why some of the PE deals struck in the last few years might unravel, as the global economy looks set for a major downturn.

With regard to returns, PE delivered handsome gains for its clients in 2021. Even on a historical basis, financial sponsors have typically produced stronger pooled net internal rate of return (IRR) than public equities over different time horizons and geographies. 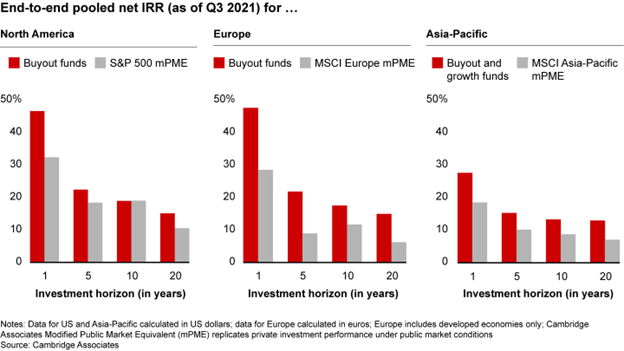 However, the party might be coming to an end, and the music could be about to stop as global monetary tightening will increasingly make exits tougher, thanks to liquidity drying up on a relative basis. This dynamic is also likely to dampen the enthusiasm of new investors for acquiring PE stakes in the secondary market.