The winter of ’22 will be a testing time for all of Europe. With the closure of the Nord Stream pipeline in the first week of September, the EU, including the UK, are bracing for what could be one of the toughest tests of economic and political will that could potentially challenge the best of governments in deft maneuvering between the two.

The biggest impact could well be in the manner that EU has been viewing its own economic policies. In the past, it has been quick to penalize economic profligacy, like in the case of the Greek bailout a few years ago. Today, the same principles1 have been given a go by in the wake of surging gas prices. By the time the winter withdraws and spring arrives in 2023, the European Union is looking at retail subsidies, nationalizations of utilities, price caps, taxing profits, soaring inflation, struggling middle class and a looming social unrest. You might be forgiven if you thought you were in early 20th century. 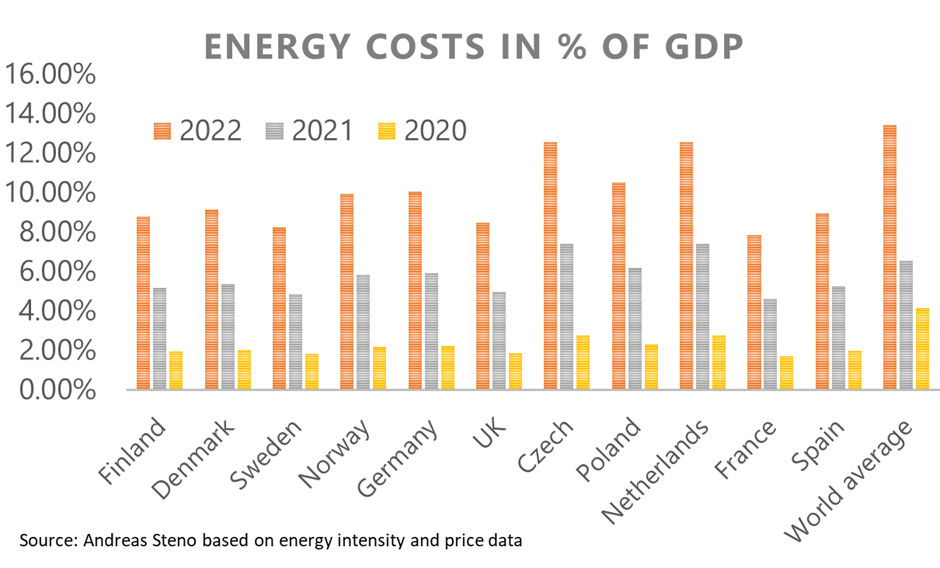 As gas prices soared ten times their ten year average, the response has been a mix of creating new supply lines, exploring alternative energy sources and managing demand reduction. It is estimated that EU, along with the UK, will be spending close to $650 Billion in its bid to manage the winter of 2022. For instance, Germany announced a $300 one-off allowance for its workers, in addition to a $147 million funding for low-income families. Similarly, every EU member has announced a slew of measures to cushion the crippling impact of gas prices on households.

On the other hand, governments are also considering measured ways for demand destruction. In July, the European Commission proposed a 15% demand reduction plan2 between August ’22 to March ‘23. Britain is staring at around 60% of its manufacturing plants shutting down, while the rest of the EU nations are not very far behind. In the third week of September, Germany announced the nationalization of its biggest gas importer Uniper to secure against supply side instability, signaling a reversal of the free market approach to its utilities industry.

There have been some concerted efforts on the supply side to shore up the resources. The traditional energy practice of ‘store-in-summer-to-use-in-winter’ for gas has continued to be a success, with a target of 82% storage achieved3 against a targeted 80%. On the Liquified Natural Gas (LNG) front, focus has been on creating more floating LNG terminals. Europe’s LNG imports have risen by 70%, and Russia now provides only 9% of the EU’s imported gas, down from 40% pre-invasion.

The European crisis has laid bare the fact that notwithstanding the potential of SWB sources of alternate energy, fossil-fuel will continue to hold sway for most of the global energy requirements in the near to medium term.

As always one could seek out a silver lining. The crisis has led to possible windfall profits in the alternative energy business, which has resulted in a proposal of ‘windfall tax’ on these extraordinary profits. Another offshoot impact has been the discussion amongst several EU communities on restarting the old decommissioned nuclear plants. Germany ruled to keep two of its nuclear plants alive this winter, again a policy reversal of sorts in a country where several lawmakers are now rethinking their positions on nuclear energy.

Where does it leave the investors? Clearly, there is a massive realignment of thought along energy investment due to the European crisis, which will have its impact worldwide. The so called ‘dirty’ investment tag that was hung on some of the private equities due to their continued investment in coal could become water off the duck’s back. Overall investment in fossil fuels rose in 2021-22. Energy independence has assumed a significant place and is possibly being replaced by Energy Sovereignty, a term that could begin to dominate the government as well as private fund managers’ lexicon. And there will be significant dip in the rhetoric on net-zero emissions as a fallout of the European winter of 2022.

At the same time, SWB investments will also gain ground and understandably, it will not be in an either/or situation but a move towards providing sovereign energy sufficiency in the medium and long term. Nuclear energy investments4 will remain firmly in the realm of government funding as it continues to be seen as a sovereign risk.

Back to the Future

At a macro-economic level, there will be near-term impacts across the region. With subsidies continuing to increase as a percentage of GDP, there will be additional pressure on public debt in these economies. This could fuel a further increase of interest rates, which then will impact prices that affects the poor and the middle and demands protection.