In terms of universal global volatility, a single strategy seldom provides a solution. This is especially true in current times when there are several independent but seminal events that seek to impact across a wide variety of asset classes. Multistrategy funds are one way to manage the volatility and ensure a consistent return.

If one were to try and explain the nuances of a Global Multi Strategy Fund (GMSF), it would probably to hold many opposing and unrelated asset classes in a single portfolio and still retain the ability to post reasonable returns to the investors. By definition, it follows that a GMSF would ordinarily return less than any one specific strategy fund at any given point in time. Typically, a GMSF allocation spans market neutral and event driven equity strategies on a global, regional or sector basis, as well as fixed income relative value and special situations strategies, including sovereign debt (DM and EM), Credit (investment grade, high yield and distressed), and foreign exchange.

However, this year has been different. In an unusual situation where the equity and bonds both declined, the performance of the GMSFs has been one of the hallmarks of the market. A BNP Paribas survey found that Multi-strategy, is predicted to be the best performing strategy in 2022, after being # 2 in 2021, behind event-driven. Multi-strategy is also expected to see the second highest net inflows this year, following specialist equity long/short funds. For instance, Citadel’s multi-strategy flagship fund Wellington rallied 7.5% last month, bringing its year-to-date performance to 12.7%, in direct contrast to the overall hedge funds that saw a sharp fall, owing to the Fed’s tightening, the war of attrition in Europe, both of which threaten to continue at least till the end of ’22, and spiralling inflation in the US, which hit a 40 year high in mid-year.

So, why are GMSFs suddenly in the spotlight. Starting with the Covid ’19 which began in early 2020 in the US, the entire global financial markets have been on constant turmoil. While Covid gave the initial shock and worsened with the second and the third wave, the war in Europe was another event that exacerbated the already fragile structure of the funds. These being the causes, the effects were the Fed’s tapering and raising interest rates aggressively which had its immediate impact on the equity markets and subsequently on the bond yields. To add to the mess, the melting of the crypto market which was just 12 months back seen as the ‘Next Big Thing’, took the wind out of the sails of the hedge funds.

Multistrategies are the typical answers in these volatile situations. Since multi-strategies are a basket of asset classes with very little / no relationship with each other, they act as a counterweight amongst themselves in order to balance the returns. Also a single-strategy fund is typically managed by a star fund manager, many of who are currently in the red due to the bloodshed on the Street. On the other hand, Multi-strategies are managed by a multitude of managers, each of who manages a particular asset class, and the entire volume of funds is parcelled out in different trading strategies under a single management and more importantly, under a strong layer of risk management. Since there is safety in numbers, it is easy for the fund to quickly transition from one asset class to another or even from one strategy to another or from one geo-weightage to another with relative ease and speed. Since there are no Star asset managers, the fund finds it easy to transition strategies and in an odd case or two, even dispense with the fund manager in question, in case of continued under-par performance. 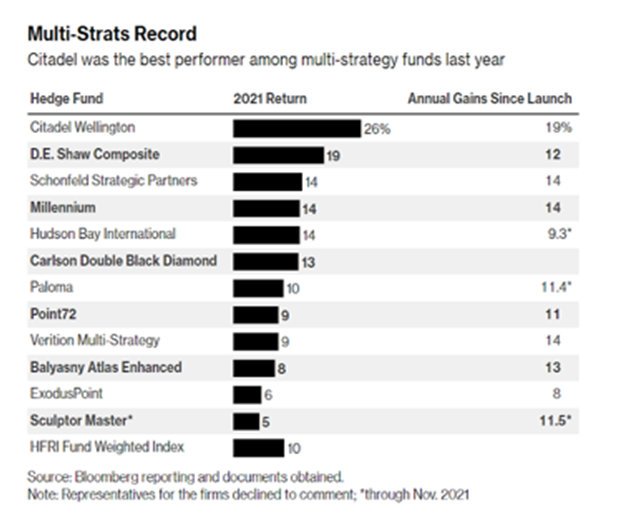 The New Cowboy in Town

The numbers are then easy to understand. According to Bloomberg research, star performer Millennium has suffered one annual loss over thirty years of trading, in 2008, when they fell 3%. Citadel, another major player has fallen twice in the same period. However, just in the last five years more than 3,350 hedge funds have shut down, reflecting the precarious nature of single-strategy funds.

An AIMA research on Hedge Fund Confidence Index – Q1- 2022, reveals that global macro (+19) and Multistrategy (+18) reported the highest confidence scores. It is therefore little wonder why both were voted as being among the most popular strategies that investors would allocate to in the first six months of this year.

On the downside, GMSFs are expensive, sometimes as high as 10% as compared to the 1.5-2.5% by hedge funds. However, the fact they substantially de-risk by having a more steady stream of returns attests to their growing popularity.

In a world that seems to be continuously shrouded by mists of grey, in the middle of economic turbulence, geo-political flux and uncertainty of events even in a 3 month window, Multi-strategies could well be the one way to the investors to keep their shirts on.