Private Credit Is No Bubble – Not Just Yet

Private credit as an asset class has grown steadily over the past two decades. Market estimates suggest that the industry today manages assets worth more than $1.2 trillion. According to the Institutional Investor, this translates to a near 25% year-on-year growth. Such steady growth over a long period is enough to drive anxiety pangs. However, as we speak, more companies are setting up their own private debt vehicles. And, the trend isn’t limited to the United States as investment companies across other economies join the bandwagon.

Less than a fortnight after private equity firm L Catterton and asset management firm Credit Suisse launched private debt vehicles, we have reports that global giant Carlyle has joined hands with Sydney-based Amicaa to manage a diverse portfolio of private debt investments in Australia and New Zealand. And that’s not all, investment banks led by JP Morgan and Deutsche Bank are also exploring direct lending operations to ward off threats from private credit companies’ high-fee business of financing risky enterprises.

Anxiety over an imminent bubble burst might also have arisen following reports that fundraising among private debt funds in the first six months of 2022 was the lowest since 2017 – in fact a shade lower than the levels of H1 2020 (see table) when the pandemic was at its prime. 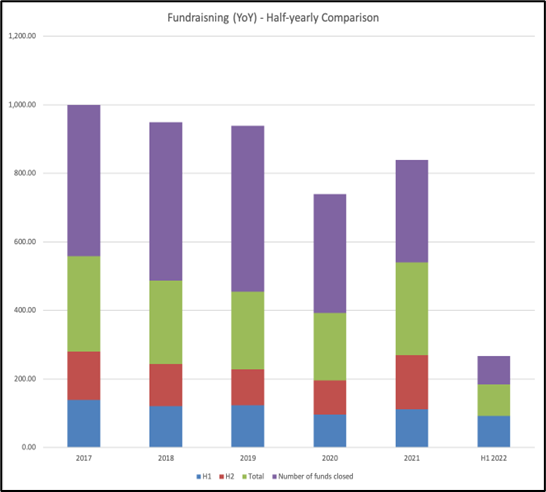 Total fund raise stood at $91.1 billion over the six months. And, if 2022 were to mirror the 2021 trend, we could see a sprightly leg up during the second half (see table). In January-March, average fund sizes hit $1.5 billion when a few large funds closed out. This may have marginally reduced over the April-June quarter, but market analysts expect 2022 to set a record for average fund size. 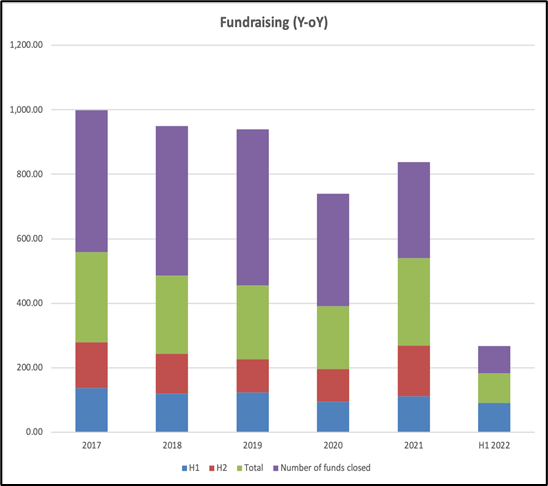 So, why are institutions and individual investors flocking to this asset class? That too at a time when high-yield issuance is down 65% year-on-year from the first quarter of 2021. The answer lies in two simple words – robust returns. Alternative investment consultant Cliffwater, which manages $223 billion in assets, has generated annualized returns of 9.2% over a 13-year period starting 2008. This compares favorably with traditional fixed-income markets and outperforms the high-yield bonds by close to 200 basis points per year.

Of course, a contrarian view is that spreads of public and private debt have considerably narrowed over the first six months of 2022. While the high-yield bonds spread wider, private credit saw the spreads narrowing. In spite of the fact that bonds are fixed-rate securities and direct credit comes with a floating rate, Cliffwater estimates that the current yields stand at around 7.7% post the Fed’s rate hikes that caused reference rates to move up between 100 to 150 basis points. With junk bonds yielding about 6.5%, analysts are worried about this narrowing of yields from private lending. 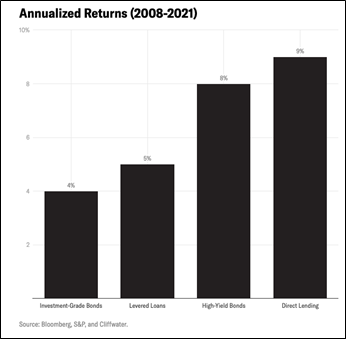 That private credit continues to compare favorably with junk bonds is stating the obvious. Private equities are comfortable lending to PE-sponsored companies at five or six times their EBITDA, while the regular BB bonds get an average leverage of around 3.5 times the same.This is also perceived as an additional risk, given that such companies could run into financial mayhem sooner than those funded by the high-yield bonds.  Having said so, when a company does go under, private credit gets a premium position in the process of getting traditional covenant protection compared to the bonds. So, in terms of credit loss, the private credit does appear a safer bet – at least for the short-to-medium term. And the same is reinforced by data around recoveries. Private loans have historically recovered 50-60% of par given a default where bonds recover only 40-50% on average.

All of these point to private credit’s continued dominance for some more time – at least till such time as the syndicated bank debt market remains sluggish and issuance of junk bonds stays stagnant. Direct lending remains the only means to finance leveraged-buyout transactions. Given that despite its recent growth, private credit remains the smallest piece in the overall credit market, accounting for just 2.2% of the total $55 trillion assets available in the US. There’s just too much headroom available for this bubble to burst any time soon. With valuations coming down and underwriting becoming more conservative, private credit remains positioned to be a good source of income and excess return for investors who’ve money to spare.