The Boom in wealth Management: Implications for Asset Managers

This month, in August 2022, Nuveen, the TIAA owned US based asset manager opened their 17th office in Zurich as “strategic move to bolster its private wealth offering in Europe”. Across the pond, in the US, another storied Financial Giant changed its name to “Schwab Wealth Advisory”. Last June, in the middle of the Pandemic that was raging across the world, JP Morgan acquired UK based robo-advisor Nutmeg for around One Billion Dollars, to add heft to their wealth management digital capabilities. Less than a year later, Royal Bank of Canada announced plans to buy Brewin Dolphin, UK’s larger player in Wealth Management for around US$2 bn to become a major player in the UK wealth market.

These events, though seemingly unconnected, have one thing in common – to actively play a much larger role in the burgeoning Private Wealth management business, which is expected to grow by a massive 67% over the next 9 years and touch around US$230 trillion by 2030, as per Bain and Company. In comparison, the traditional Asset Management business is expected to clock just around US$150 trillion during the same period.

There are multiple reasons for this rather startling growth in Private Wealth Management. Firstly, the financial markets have been roiled by global events such as the Pandemic, geo-political stresses and the by-now-six months old war which led to a heating up of the oil prices. This has led to a prolonged period of Fear-Uncertainty-Doubt (the FUD factor). Secondly, the resultant inflationary pressures on the market led to a sharp rise in interest rates across the world. This has led to a large number of DIY investors, who are facing a rough time for the first time, seeking professional advice and guidance. The third reason, according to the Bain report, is the rising inequality in wealth and concentration of wealth. The well-known Mathew’s principle is being proved again where the rich are getting richer. As a result, there is a scramble to catch them young and nurture them with the rising wealth and sharpen the focus on the young wealthy.

Most of the Wealth Management advisories are essentially targeting the newer and younger customers who come into new wealth as well as the next generation of younger inheritors, who would probably prefer to switch from the erstwhile advisors. The emergence of new asset classes such as Crypto is also encouraging the younger wealth investors to seek out asset management companies that are able to cater to them. “The rougher things get the more people will need wealth management,” said Markus Habbel, a partner at Bain who worked on the report.

Cap Gemini, in their report on Top Wealth Management Targets 2022, say that the younger generation want choices and are not prone to accepting their parent’s choices as far as managing the wealth is concerned. This is further compounded by the change in their life choices, which are no longer wealth and businesses but focussed more on holistic approach to their well being. As a result, there is a growing demand for products related to Environment, Social and Governance products. Cap Gemini’s World Wealth report suggests that around 39% of those under 40 are likely to ask for an ESG score in respect of the product offered to them. Also, Being digitally savvy, they are also looking for an experience that is no longer based on purely F2F (Face to Face) interaction but are extremely comfortable with digital interfaces that provide them not just control over their experience but also are designed to provide value added services.

As a consequence, engaging with the Gen Y and Gen Z will call for a comprehensive dialog not just about their investment strategies but providing them with digital solutions and taking the conversation beyond investment and returns and beyond portfolio performance to build trust and loyalty. 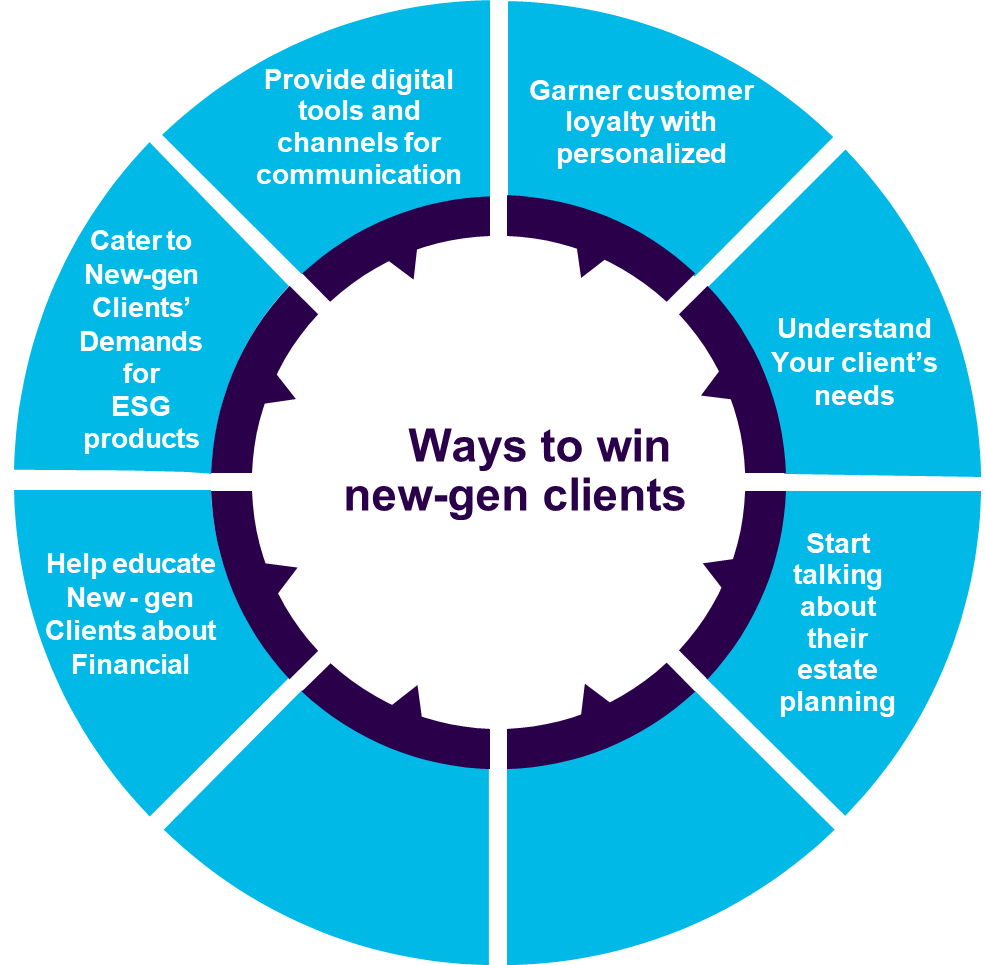 The other risk that has arisen is also the tendency of the institutional allocations being taken away during times of financial stress – the likes of which we are seeing currently. On the other hand, Wealth Management allocations are much more spread and have the tendency to be a lot more stickier, according to Matt Brown of CAIS, a platform for Alternatives, as quoted by WealthManagement. Consequently, most of the Global Asset Managers have gone on to build large sales teams, fine-tuned their product portfolio to cater to the young-wealthy, new and innovative structures like low-minimum, simplified tax reporting and regular liquidity windows.

The deepening of the Wealth Management market also has additional ramifications. The lowering of the minimum thresholds will directly impact the size of the market and possibly even the dispersion. Unlike the traditional wealth business which had few clients, the current trend of expanding the ambit naturally will call for integrated digital platforms that democratize the experience using digital tools for the Gen Y and Gen Z investors.

The party has just begun. It is expected that there could be a spate of M&As in this space and also a spectre of consolidation by large companies to gain market share. With inequality levels rising and a heady combination of new-wealthy and the generational change in the inheritors, the Private Wealth Management is, to quote Confucius, in for some very interesting times.